The Crisis of Higher Education 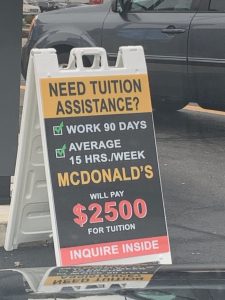 Is this what we’ve come to with higher education in America?

Once upon a time, Americans graduated high school and went to college. Or not. It depended on what they wanted to do with their lives.

If their families had some money saved, they paid for their children’s college education. In other cases, students paid their own way through school with jobs waiting tables and such.

Soon we moved on from that time. More and more people started going to college, with the hope of building wealth and landing white collar jobs. The degree was the entry ticket to those jobs; so no matter what you studied while there (You like French? Why not major in it!), employers were just impressed that you went.

But, as with everything in this world, the principles of supply and demand set in. College became more expensive as more people went.

College became almost a right of passage. Practically everyone was going, and for more advanced degrees. Society applauded it–after all education is the key to success. So, the more the merrier. Right?

But somewhere in that time, the economy changed. Jobs changed. No longer were there simply doctors, teachers and businesspeople–there were specialists. In every field imaginable.

That bachelor’s degree in French? It won’t mean much in today’s world on it’s own.* But America hasn’t completely picked up on that. Parents are still sending their kids to college without really understanding why. Everyone’s stopped asking what students are going to to with their lives.

And all the while, the cost is adding up.

And when parents can’t pay for it all, their children are paying for it. And with price tags ranging between $20,000 and $80,000 a year…it’s no longer something students can pay for by waiting tables in their spare time.

So, this is the American reality. $1.5 trillion in student loan debt, with college graduates paying off loans into their 40s. And McDonalds offering to help with their employees’ tuition.

(Which is super nice of McDonalds, right? But step back and think for a minute. Is this where we really are now?)

If you Google “tips for paying for college,” you’ll find advice such as crowd-funding among top solutions. (Really. Here’s one such article.)

Guys. I’m going to break the fourth wall right here and tell you this is ridiculous.

There’s a better way. It’s called going back to the basics and asking teens why they’re going to college. And then help them develop a plan for success–through real, thorough, one-on-one career development. And real-world job exposure. And school research.

That’s a thing, and a thing we all need to be doing for our kids. We’ve got to stop buying college like it’s a right of passage–it’s too important to treat it like that.

It is the biggest investment parents will make in their kids’ futures. Please, do your children a favor and save them the time, stress and money of picking the wrong college and major. Instead, help them discover their inner passions and match them with the right school. At the right price. Through proper college planning.

It’s a newer thing…but a fledgling industry that exists. And it’s growing. To solve the crisis of higher education.

So join this movement today…and don’t look back.